Our 2022 Webinars will be available for viewing through Zoom and require you to be registered. Links available below. 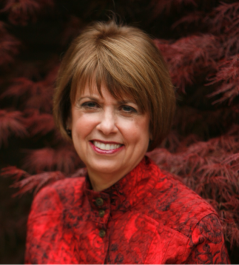 Sandy Eisenberg Sasso is Rabbi Emerita of Congregation Beth-El Zedeck, Indianapolis, Indiana where she served for 36 years, and is presently director of the Religion, Spirituality, and the Arts Initiative, IUPUI Arts and Humanities Institute.  She was the first woman ordained at the Reconstructionist Rabbinical College in 1974.  She and her Husband, Dennis C. Sasso were the first practicing rabbinical couple in would Jewish history.

Rabbi Sasso has pioneered in a creative literature engaging the religious imagination of children. Author of over 24 children’s books, she is a recipient of the Indiana Author’s Award and a National Jewish Book Award and was featured on NPR’s Speaking on Faith (now On Being) in a program called The Spirituality of Parenting. She was keynote speaker at two International Conferences on the Spiritual Life of Children.

Active in the arts, civic and interfaith communities, she lectures and writes on midrash, women, and spirituality.  She earned a Doctor of Ministry from Christian Theological Seminary and is the recipient of many awards and honorary Doctorates. She has served as President of Gleaner’s Food Bank and was Chairperson of the Spirit and Place Arts, Humanities, and Religion Festival.  She continues to serve on many civic boards including Indiana Humanities, IUPUI Board of Advisors, and the editorial board of the Encyclopedia of Indianapolis. She is the recipient of the “Sagamore of the Wabash”, the highest civilian honor awarded by the Governor of the State of Indiana.  She received the Heritage Keepers Award from the Indiana State Museum and The Spirit of the Prairie Award from Conner Prairie, and a Torchbearers Award from the Indiana Commission for Women. She was a featured speaker at the Women’s March in 2017 and 2018.

She is co-founder of Women4Change Indiana, a statewide organization of 5000 focused on educating, equipping, and mobilizing Hoosier to create positive change for women.

Rabbis Sandy and Dennis Sasso are the parents of two children, David (Naomi) and Debbie (Brad) and grandparents of Darwin, Raven, Ari and Levi. 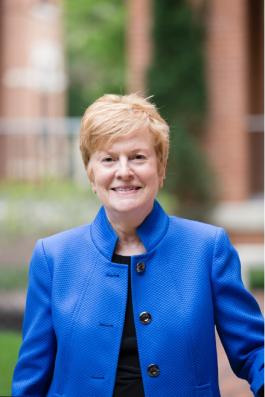 Beverly Roberts Gaventa is Helen H.P. Manson Professor of New Testament Literature and Exegesis Emerita at Princeton Theological Seminary.  Her publications include Our Mother Saint Paul (Westminster John Knox, 2007), The Acts of the Apostles (Abingdon, 2003), I and II Thessalonians (Westminster John Knox, 1998), Mary: Glimpses of the Mother of Jesus (University of South Carolina, 1995; Fortress, 1999), and From Darkness to Light: Aspects of Conversion in the New Testament (Fortress, 1986), and When in Romans: An Invitation to Linger with the Gospel according to Paul (Baker Press, 2016). In 2020, Gaventa received the Burkitt Medal by the British Society for Arts and Humanities, an annual award in biblical studies rarely bestowed on an American scholar. In 2016 she was president of the Society of Biblical Literature, the largest professional organization of biblical scholars in the world. She has lectured widely in the U.S. as well as in Canada, Europe, South Africa, and Australia. Dr. Gaventa is a ruling elder in the Presbyterian Church U.S.A. and a member of the University Presbyterian Church, Austin, Texas. 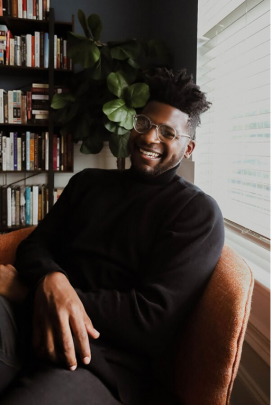 Danté Stewart is the author of debut memoir Shoutin’ in the Fire: An American Epistle, a stirring meditation on being Black and learning to love in a loveless, anti-Black world. Stewart uses his personal experiences as a vehicle to reclaim and reimagine spiritual virtues like rage, resilience, and remembrance—and explores how these virtues might function as a work of love against an unjust, unloving world. This sharply observed journey is an intimate meditation on coming of age in a time of terror. Stewart reveals the profound faith he discovered even after experiencing the violence of the American church: a faith that loves Blackness; speaks truth to pain and trauma; and pursues a truer, realer kind of love than the kind we’re taught, a love that sets us free.

Of Stewart’s debut, Imani Perri laudes, “Standing in a centuries old tradition of spiritual autobiography, Shoutin’ in the Fire is at once a coming of age story and a conversion narrative. From Pentecostal origins, he travels through institutions that hold onto an idea of ‘white Jesus,’ and finally to a spiritual reckoning in which he recognizes Black life to be not only valuable but holy.” While Deesha Philyaw notes, “Some of us joke about Jesus needing better PR than what today’s evangelical church provides. Enter Danté Stewart. With unparalleled candor, vulnerability, and love, Stewart takes us along his personal journey to understanding what it is to be Black, Christian, and American. The church is long overdue for a reckoning with white supremacy, and Stewart has written a brilliant blueprint.”

Stewart’s voice has been featured on CNN, The Washington Post, Christianity Today, Sojourners, The Witness: A Black Christian Collective, Comment Magazine, and more. He received his B.A. in Sociology from Clemson University. He is currently studying at the Candler School of Theology at Emory University in Atlanta, GA. 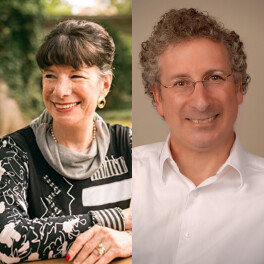 Holding a B.A. from Smith College, M.A. and Ph.D. from Duke University, and honorary doctorates from the University of Richmond, the Episcopal Theological Seminary of the Southwest, the University of South Carolina-Upstate, Drury University, Christian Theological Seminary, and Franklin College, Professor Levine has been awarded grants from the Mellon Foundation, the National Endowment for the Humanities, and the American Council of Learned Societies. She has held office in the Society of Biblical Literature, the Catholic Biblical Association, and the Association for Jewish Studies.  She served as Alexander Robertson Fellow (University of Glasgow), and the Catholic Biblical Association Scholar to the Philippines. She has given over 500 lectures on the Bible, Christian-Jewish relations, and Religion, Gender, and Sexuality across the globe.

Her books include The Misunderstood Jew: The Church and the Scandal of the Jewish Jesus (Publisher’s Weekly Best Books of 2007; audio books); Short Stories by Jesus: The Enigmatic Parables of a Controversial Rabbi (Catholic Book Club; translations: Spanish, Italian; audio books);  The Meaning of the Bible: What the Jewish Scriptures and the Christian Old Testament Can Teach Us (with Douglas Knight; translation: Chinese); The New Testament, Methods and Meanings (with Warren Carter); and The Gospel of Luke (with Ben Witherington III -- the first full-length biblical commentary co-authored by a Jew and an Evangelical). Her most recent book is The Bible With and Without Jesus, co-authored with Marc Z. Brettler.

With Marc Brettler, she co-edited The Jewish Annotated New Testament; she is also the editor of the 13-volume Feminist Companions to the New Testament and Early Christian Writings, and The Historical Jesus in Context (Princeton Readings in Religion; translation: Japanese). Presently she is editing several volumes in the Wisdom Commentary series, and she is the New Testament editor of the new Oxford Biblical Commentary Series. With Joseph Sievers, she is co-editing a collection of essays on the Pharisees.

Her adult education volumes and videos include the Teaching Company Great Lectures: "Introduction to the Old Testament," "Great Figures of the Old Testament," and "Great Figures of the New Testament"; Abingdon adult education: Short Stories by Jesus Study Guide;  Entering the Passion of Jesus: A Beginner’s Guide to Holy Week; Light of the World: A Beginner’s Guide to Advent; and most recently, Sermon on the Mount: A Beginner’s Guide to the Kingdom of Heaven; and The Kingdom of Heaven: 40 Devotionals.   In Spring 2019 she was the first Jew to teach New Testament at Rome’s Pontifical Biblical Institute; in 2021, she was elected to the American Academy of Arts and Sciences. At Vanderbilt, she chaired the faculty senate.

Marc Brettler, a member of the American Academy for Jewish Research and the Council of the Society of Biblical Literature, is the Bernice and Morton Lerner Professor of Jewish Studies in the Department of Religious Studies at Duke University.  The Dora Golding Professor of Biblical Studies Emeritus and former chair of the Department of Near Eastern and Judaic Studies at Brandeis University, he has also taught at Yale University, Brown University, Wellesley College and Middlebury College.  He has also taught in various adult Jewish education settings, including the Wexner Heritage Program, the innovative Me’ah program in Boston, and has served as scholar-in-residence for the Foundation for Jewish Studies in Washington DC.  He is actively involved in many aspects of Jewish communal life, and has served on the board of Boston’s Leventhal-Sidman Jewish Community Center and Gann Academy—the New Jewish High School.  A graduate of Brandeis University, he has published and lectured widely on metaphor and the Bible, the nature of biblical historical texts, and gender issues and the Bible. He is co-editor of the Jewish Study Bible, first published by Oxford University Press in 2004.  That book has won a National Jewish Book Award, and was called “a masterpiece” in a review in the Times Literary Supplement.  A second, expanded and revised edition was published in 2014.  His How to Read the Bible (Jewish Publication Society), which has been called “an eye-opening journey through a familiar text, a fresh look at an old story,” was the award winner in the Judaism category of the Best Books 2006 Book Awards.  A slightly revised version was published in paperback by Oxford University Press as How to Read the Jewish Bible.  He is co-editor with Amy-Jill Levine of The Jewish Annotated New Testament (Oxford University Press), the first book of its type, which was written up in the N.Y. Times, and has just been republished in an expanded, highly revised version.  He is co-author of The Bible and the Believer: How to Read the Bible Critically and Religiously (Oxford University Press), recently republished as a paperback.  Other books are Biblical Hebrew for Students of Modern Israeli Hebrew, published by Yale University Press, and The Creation of History in Ancient Israel and Reading the Book of Judges, published by Routledge. He served as an associate editor of the New Oxford Annotated Bible, and has contributed to all ten volumes of My People's Prayer Book, a commentary on the siddur, which won a National Jewish Book Award in 2008.  He also wrote the section on “Our Biblical Heritage” in My People’s Passover Haggadah. He contributed the essay “Introduction to the Torah” in Three Testaments: Torah, Gospel, and Quran, ed. Brian Arthur Brown, which won an Independent Publisher award for best book in religion in 2014. He has written for The Forward and The Jerusalem Report, has appeared on the Television series “Mysteries of the Bible,” was heard on the National Public Radio show “All Things Considered,” and was interviewed on “Fresh Air” by Terry Gross.  While serving as a senior research fellow at the Mandel Leadership Institute in Jerusalem, he began writing a commentary on Psalms 91-119 for the Jewish Publication Society Bible Commentary.  He is committed to applying innovative methods to classroom teaching, including teaching via the internet, and is the recipient of the Michael A. Walzer Award for Excellence in Teaching, and the Keter Torah Award from the Boston Bureau of Jewish Education.  He has spent recent sabbaticals studying, teaching, and lecturing in Israel, China, and Japan.  In summer 2015, after retiring from Brandeis University, he assumed the Bernice and Morton Lerner Professorship in the Department of Religious Studies at Duke University.  In 2017, he was one of 100 scholars and leaders asked to participate in the “American Values Religious Voices” project.