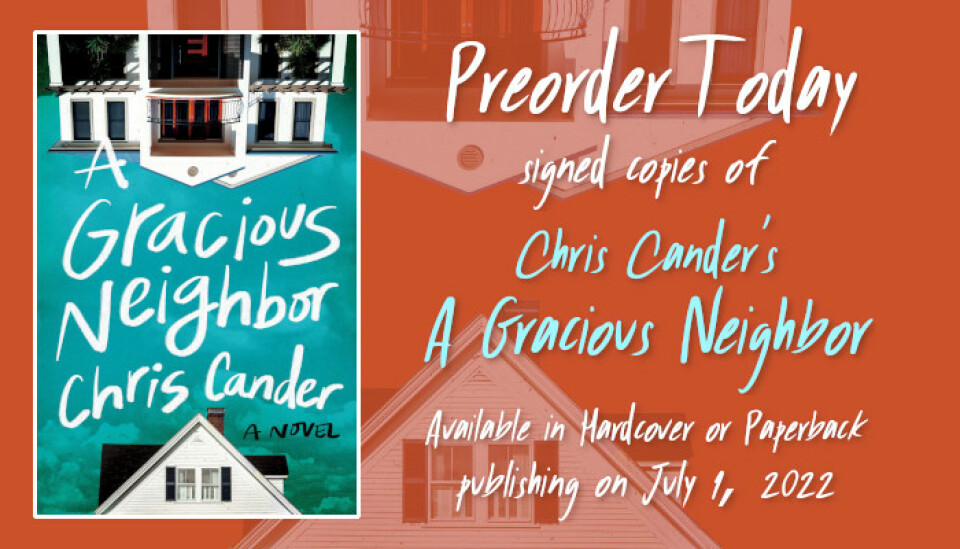 Chris Cander will be in conversation with Cameron Dezen Hammon.

Entry to the event is free for the public. Copies of A Gracious Neighbor are available in both hardcover or paperback.

A gripping novel about friendship, secrets, misjudgments, and redemption among women by the USA Today bestselling author of The Weight of a Piano.

Martha Hale is an affable wife and mother who lives in an affluent neighborhood of well-tended lawns and high expectations. If only her clumsiness at penetrating the social circles of her neighbors weren’t making Martha so lonely.

That’s why she’s thrilled when the glamorous Minnie Foster, a former high school classmate, moves in next door. Despite Martha’s determination, picking up where they left off is trickier than anticipated―especially when their memories of the past don’t always align. But Martha is undeterred. In fact, her preoccupation with Minnie’s life, her success, and her marriage is becoming an obsession. When she sees a darkness and shame hiding inside Minnie’s perfectly deceptive home, Martha realizes that not even Minnie’s secrets are what they seem.

Visceral, sharp-witted, and deeply empathetic, A Gracious Neighbor explores the judgments women pass on one another and the ills of a society curated to keep them on the outside looking in.

Chris Cander is the bestselling author of THE WEIGHT OF A PIANO, which was named an Indie Next Great Read in both hardcover and paperback and which the New York Times called, “immense, intense and imaginative,” WHISPER HOLLOW, also named an Indie Next Great Read, and 11 STORIES, named by Kirkus as one of the best books of 2013 and winner of the Independent Publisher Book Awards for fiction. She also wrote the children’s picture book THE WORD BURGLAR, and the Audible Originals “Eddies” and “Grieving Conversations.”  Cander’s fiction has been published in twelve languages. She lives in her native Houston with her husband and two children. For more information, visit www.chriscander.com.

Cameron Dezen Hammon is the author of This Is My Body: A Memoir of Religious and Romantic Obsession (Lookout Books), the Nonfiction Discovery Prize Winner for the 2019 Writers’ League of Texas Book Awards, a bronze medalist for the Independent Publisher Book Award in Creative Nonfiction, and a finalist for the Foreword INDIE Book of the Year in Autobiography and Memoir. Kirkus called This Is My Body “a generous and unflinchingly brave memoir about faith, feminism, and freedom.” Her nonfiction has appeared in The Kiss anthology (W.W. Norton), Vogue, Ecotone, the Literary Review, the Houston Chronicle, NYLON, and elsewhere; and her essay “Infirmary Music” was named a notable in The Best American Essays 2017. She earned her MFA from Seattle Pacific University, and currently teaches nonfiction writing at Rice University.