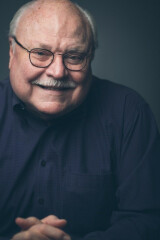 David Ashley White, who began attending services at Palmer Episcopal Church in 1975 and was confirmed there in 1978, has been named the parish’s composer-in-residence, thanks to a gift from an anonymous supporter. He, the Palmer Choir, and Brady Knapp, Director of Music, have enjoyed a fruitful musical association for a number of years, and a notable result is the CD, Praise the Spirit: Sacred Music of David Ashley White (Gothic label, G-49254), comprising a number of the composer’s anthems, motets, and hymns. A second recording, So the day dawn, music for Choral Evensong and Concert, was released on the Gothic and Naxos labels in May of 2016.

A seventh-generation Texan, White is a Professor of Composition in the Moores School of Music, University of Houston, serving as director of the school, and holding the Margaret M. Alkek & Margaret Alkek Williams Endowed Chair, from 1999-2014. In 2010, Houston mayor, Annise Parker, appointed him to the board of the Houston Arts Alliance, and he continues in that position. He has long played an active role in Houston’s musical scene, composing works for various groups, including the choirs of Palmer Church, St. Paul’s United Methodist Church, and Christ Church Cathedral, as well as Houston Chamber Choir, Houston Masterworks Chorus, the Concert Chorale from the Moores School and the University Singers from the University of St. Thomas. His music is frequently performed nationally and internationally, and practically his entire catalog of works is published, including four collections of his hymns. His hymns also appear in various denominational publications, including the hymnals of the Methodist, Presbyterian and Episcopal churches. The latter, The Hymnal 1982, includes his hymn tune PALMER CHURCH, composed in 1981 in honor of his home parish.