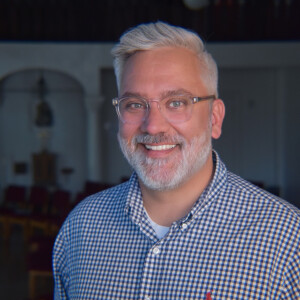 Roger Hutchison is Director of Christian Formation and Parish Life at Palmer Memorial Episcopal Church in Houston, Texas. Roger joined the staff of Palmer in June of 2015. Also an artist and writer, his first book, The Painting Table: A Journal of Loss and Joy has been used by people of all ages in schools, churches, and community groups across the United States. His artwork has been exhibited throughout the world and he regularly offers workshops nationally for children, youth and adults on how to express their thoughts and relationship with God through the art of painting with one's hands, making it accessible to all. Roger's second book, Under the Fig Tree: Visual Prayers and Poems for Lent was released in December of 2015 and quickly became a Church Publishing Lenten bestseller. Awarded in 2014 with the "Governor's Order of the Silver Crescent," South Carolina's highest civilian honor for volunteer or community service, Roger now lives in Sugar Land, Texas with his wife Kristin, their daughter Riley, and Scout the cockapoo.