Today’s guest speaker at the Rector’s Forum at 10:15 a.m. in St. Bede’s Chapel is Mr. Justin Normand from Irving, Texas. Last fall this Presbyterian who wears a cowboy hat and boots and has a fancy white beard stood on a public sidewalk outside the nearest mosque to his home with a sign. He had become increasingly bothered by hate crimes that seemed to be targeting people because of their religious beliefs. So he stood there on the sidewalk with his sign that read: 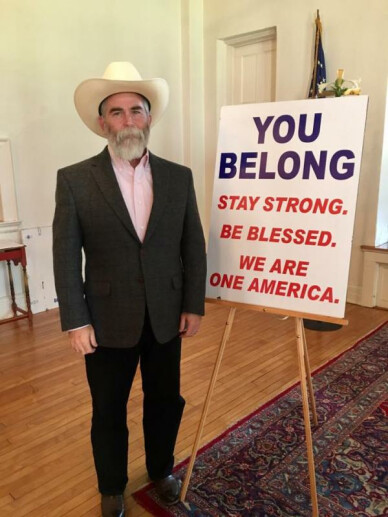 Man outside of a mosque in Texas this morning pic.twitter.com/bsbfW1PkA9

The image quickly went viral and spread across social media platforms as most people reacted warmly and emotionally to this small act of love. Mr. Normand later wrote a post on Facebook in which he identified himself as the man who held the “You Belong” sign. He expressed a desire to live in peace with his neighbors, especially his Muslim neighbors. What stood out to me, however, was his clear explanation that he didn’t do this small act of love because he agrees with everything about their religion or to express his outrage at those who were the source of the hatred and prejudice. About those filled with hate, he wrote:

It’s not about them. Not this time, and not here. This was about binding up the wounded. About showing compassion and empathy for the hurting and fearful among us. Or, in some Christian traditions, this was about washing my brother’s feet. This was about my religion, not theirs. . . . My own religious tradition ascribes these words to my deity: I was hungry and you gave me food; I was thirsty and you gave me drink; I was a stranger and you took me in; I was naked and you clothed me; I was sick and you visited me; I was in prison and you came to me.