VOLUNTEERING IN THE COVID-19 VACCINE TRIALS 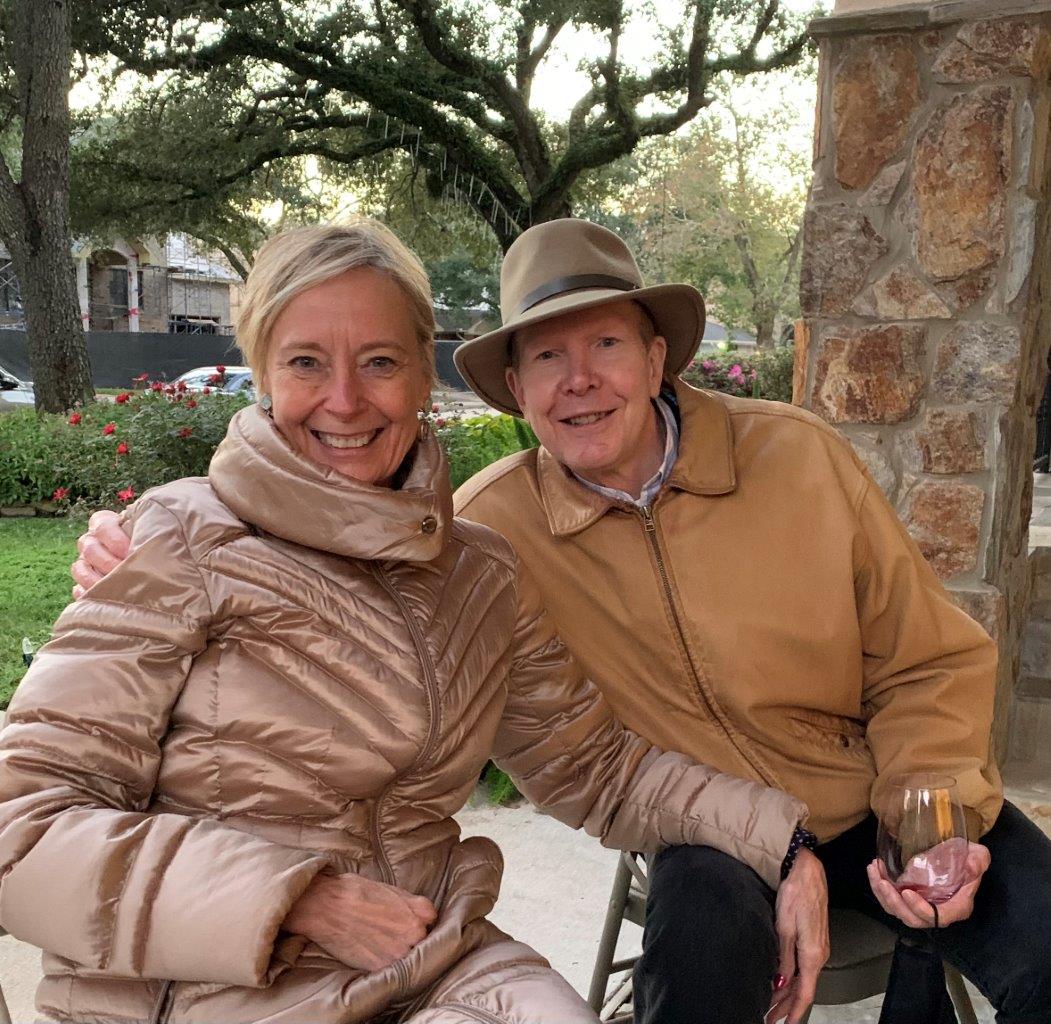 Connie and I joined Palmer in the early '90s when our son and daughter were young children. You might recognize Connie as a verger or me as a chalice bearer pre-pandemic. I am also a long-time member of the men's Bible study, part of Mac Hall's EFM group, and a Stephen Minister.

Early on in the pandemic, Connie and I considered joining a vaccine trial to fight covid-19. Mice, rats, birds, rabbits, guinea pigs, hamsters, pigs, sheep, dogs, monkeys, chimpanzees, and cats play a critical role in research that may produce new cancer treatments, new drugs, and other hoped-for cures. But eventually, researchers need human guinea pigs, and we decided it was our turn to step up.

Thanks to successful research, vaccines have saved countless lives and made fuller lives possible. A vaccine would have made a difference in my father's life. Born in 1925, Dad contracted polio in 1937. He had turned 12 two weeks earlier. He was in the kitchen, fell, and couldn't stand up. A standard knee test showed no reflexes. A lumbar puncture confirmed the diagnosis. An active, hell-raising boy turned into a bed-ridden invalid, lying in a hospital in a cast on his back or stomach for four months. He returned home to a wheelchair. His mother, Frances, willed him to live. His physical therapist, Dolly Geisel, taught him to walk on his stick legs.

Dad thought that he contracted polio from swimming in "the creek," in reality, a drainage ditch. None of the other boys with him that day wound up with effects of polio; all probably became silent carriers of the disease. Polio outbreaks had long become an annual scourge. You can bet that when the March of Dimes announced the research trial on polio was ending early because the vaccine proved so effective, the Wallace children received their vaccines.

After Dad became a doctor, he not only treated patients, he also conducted hypertension research. I worked in his research lab one summer (his lab at UTMB-Galveston adjoined the lab of Dr. William DeGroot). My job: nephrectomize rats, which were supposed to survive the surgery long enough for the running of hypertension experiments. Both the rats and I learned that had I followed Dad’s footsteps into medical school, I would not have become a surgeon.

Some of my Dad’s experiences and his belief in the value of research undoubtedly went through my subconscious when Connie and I began discussing whether we'd willingly become guinea pigs by joining a covid-19 vaccine research trial. Then I saw an article in the Chronicle about AstraZeneca seeking volunteers in Houston for a worldwide trial. I sent an email inquiry. A prompt response followed. Dr. Roberto Arduino, lead Houston investigator, and his lab, run the local study. After hearing appropriate caveats from medical cousins, we signed up via email by sending in the 27-page consent form. The study includes the right to opt out at any time. It's also set up as a double-blind study, which means neither the participants nor the researchers know who is receiving the vaccine and who the placebo. In this study, two-thirds of participants receive the vaccine, one-third the saline placebo.

I'd like to say that my ultimate decision was altruistic. That would be a lie. In late November, it looked like the Pfizer vaccine would receive emergency authorization imminently, but none of us knew how the government would ration it. Though rationing may suggest rationality, that's not always the case. I'm over 65, putting me in a higher risk category than those younger, yet nowhere near the risk of health care providers, front line workers, teachers, or those over 75. None of us knew whether another vaccine would receive emergency authorization soon. None of us knew how our federal or state governments would prioritize.

By the time we went to the first visit in mid-December - the long visit going over medical history, medications, a blood draw, and, ultimately, if everything checked out, a shot – health care workers had begun receiving Pfizer vaccines. We had lots of questions. Perhaps the biggest one was what would happen if we had the opportunity to get the Pfizer vaccine. The simple response: the trial would unblind us so we would eventually know if we had received the vaccine or a placebo. Unblinding had already begun here because most people in the AZ trial who'd already received one or both shots were doctors and nurses. As the Pfizer vaccine became available, they were unblinded.

The shot itself wasn't bad. I had a sore shoulder for less than 24 hours. The study requires that we report symptoms weekly: major symptoms, call immediately; minor symptoms, report if they last more than two days. Neither of us had major symptoms. Four days after receiving the first shot, I began getting a sore throat, freestanding, unusual for me. My throat gets sore when I have a cold; I didn't have a cold. The sore throat lasted about three days, so I reported it, aware that it could be an imagined, placebo-effect symptom.

As Connie and I approached the time for our second shot in mid-January, we became eligible for the Pfizer and Moderna vaccines. We let Dr. Arduino’s lab know before going in. To maintain study protocol, we received the second AZ-trial shot before they unblinded us. We got the shots and learned our status that same afternoon. I had received the vaccine, Connie the placebo. Two more shots (Moderna) for Connie, which she has gotten. We agreed to remain in the study, meaning we provide blood at intervals and continue weekly reporting of any symptoms.

I’m grateful to live in a time of medical miracles. Thanks to vaccines and herd immunity, this country eradicated polio. The last documented case originating here occurred in 1979.

Polio has a long tail, though. Over the last 20 years of his life, Dad suffered from post-polio syndrome. His muscles atrophied further; his joints ached; his vertebrae disintegrated into back surgeries. Dad turned 91 the August before he died, amazing for someone who contracted polio in the 1930s. The polio did not hit his lungs, unlike his friend Andy Sansouci, who began using a ventilator in his 50s and died from infection in his early 60s.

No one yet knows the long-term consequences of contracting covid-19. What we do know from doctors’ and nurses’ reporting is that winding up on a ventilator and dying from covid-19 is an awful death. In this country alone, count still rising, 500,000 dead. God willing, with our cooperation, the coronavirus becomes contained enough that it doesn’t evolve like polio  into the next annual scourge.